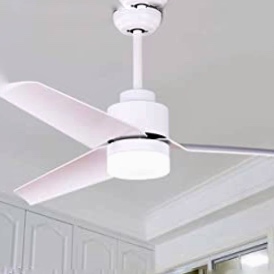 Ceiling fans are a beneficial and cost-effective way of keeping your home comfortable. A ceiling fan can better spread both hot and cold air and sustain an ideal temperature in your house. Yet, no matter how useful ceiling fans are, everyone has faced a few basic ceiling fan problems. Listed below are some common issues you may be facing with easy resolutions to solve them.

Wobbly ceiling fans seem like they may fall from your ceiling at any second. Wobbling is a typical ceiling fan problem, and there are a few leading causes of it.

With frequent use over time, these connections can lose their contact, causing your ceiling fan to wobble anytime you turn it on.

While it’s usual for your fan to produce some noise when running, too much sound is a standard ceiling fan problem. A noisy ceiling fan is another indication of loose joints in either your box, fixture, or fan. These loose pieces will clink together while your fan turns, producing a noise. Another issue could be in the fan’s ball bearings. The ball bearings rotate fan blades. They need to be well lubricated and cleaned to make sure there is no friction or resistance. It also causes them to produce a grinding noise.

If your ceiling fan does not turn on or has stopped working, it could happen because it isn’t getting any electricity. The circuit breaker being off or tripped could be the cause. Examine your electrical panel to verify this. If the circuit breaker operates appropriately, it could be an issue with faulty connections or loose wiring. Your ceiling fan may also quit running due to internal faults like an overheated motor or bad ball barrings.

A problem with flickering is common in ceiling fans. It could merely be a question of if the bulb is fried and needs changing. However, this is not always the case. Sometimes a flickering lamp in your ceiling fan could indicate a loose connection with either the bulb or the socket. A more difficult cause of the flickering could also be voltage inconstancy. Some devices draw a lot more power than others. For instance, if your ceiling fan bulb starts flickering when you switch on the washing machine, it’s a sure sign of voltage fluctuation. Contact an electrician to help you solve this problem.

Fan Stuck on One Speed

Do you experience ceiling fan speed issues? It, more often than not, suggests that your fan runs on solely one speed when switched on. Dirty or unlubricated ball barrings could be a reason for this. Another cause could be a defective fan. Additional causes could be a failing capacitor or burnt-out motor, both of which can cause your fan to operate on one speed only.

If you have a ceiling fan, some of these common ceiling fan problems you would have encountered yourself.

Always seek help from a professional electrician before attempting any work yourself. Contact Mike Fuller Electric in Ottawa today for your questions and concerns.

Get a Free Quote

Monday-Friday: 7AM-4PM
By appointment on Saturday and Sundays